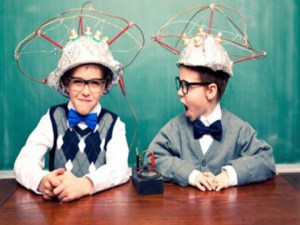 Theory of Mind is our reasoning about others’ actions using mental states – wants, thinks, feels, etc. It’s not limited to people: we sometimes say the computer hates us (or is feeling down today) if it doesn’t behave the way we expect it to. And we do it all the time with people. We say that the boy is crying because he is sad, or that the girl took the cookie because she wanted to eat it. In both cases, although we may be perfectly correct, we have no way of seeing the boy’s feelings or the girl’s desires, and therefore this is a theory that we form to explain observed behaviour. This is why theory of mind is often called “folk psychology”.

In the classic task that is still used to measure false belief – an aspect of theory of mind – researchers presented children with the following scenario: Maxi (typically a Playmobil doll) places his chocolate in the kitchen cupboard. Then he goes to play outside, and mom comes in. She finds the chocolate, moves it to a drawer, and leaves. Maxi comes back, and he wants his chocolate. The child is asked “where will Maxi look for his chocolate?” Awesomely, a 3-year-old would say: in the drawer. The researchers believe that this is because 3-year-olds do not have access to Maxi’s thoughts, and therefore they cannot understand a situation in which someone (Maxi) has a different belief than their own. Because I (the child watching this scenario) know where the chocolate is, then Maxi knows where the chocolate is. By the time children are 5 years old, almost all of them would correctly answer that Maxi will look for his chocolate in the cupboard. This task is not quite measuring theory of mind: it’s measuring false belief understanding (accepting that other people may have beliefs that do not match reality), which is a bit more sophisticated than, say, understanding that some people may like broccoli rather than chocolate (understanding desires, which is also an aspect of theory of mind).

The number of studies looking into theory of mind is insanely big. There are probably very few people in the world who can summarize all of it from start to finish. But I will highlight a couple of things that I find interesting.

Naturally, the better the child’s command over language, the better they do in all sorts of tasks of this nature. But there’s a theory saying that until the child has command over a certain linguistic structure, she cannot understand theory of mind. Specifically, the structure of “Maxi thinks that…” is a rather advanced grammatical structure, and the idea is that before the child can understand that structure, she cannot think about other people thoughts. Jill de Villier is the main proponent of this account; she has worked with my supervisor in the past and is an awesome and very smart lady.

There was a fierce debate in the scientific community regarding whether theory of mind is innate and only comes online gradually, or is it something cultural. As in any such debate, the answer is both.

Evidence for the innateness side come from the “how low can you go” game, and some studies show that infants as young as 15 months old are able to identify a false belief. The idea is that very young children have not had a sufficient exposure to environmental factors, and so the fact that they are able to understand false belief indicates that this is an innate skill.

Evidence for the environmental side come from the fact that in some countries children are able to perform the “change of location” task earlier or later than the magical age of 4. For example, in Japan, children perform worse than in the US. The argument is that Japanese language does not allow for “mind reading” because it is considered impolite to assume you know anything about other people’s state of mind. Another interesting finding is that there’s a link between number of siblings and theory of mind performance – the idea is that there’s something about siblings interactions that promotes thinking about others’ mental states.

One of the most striking findings is that children with autism are overwhelmingly bad at theory of mind tasks. This is so strong a finding that many researchers consider autism to be mainly a problem with mind reading. If you read
The Curious Incident of the Dog in the Night-time by Mark Haddon, you might have noticed that the main character’s main issue is that he cannot read other people’s feelings on their faces. This is very characteristic of children with autism and Pervasive Developmental Disorders (PDD), and can lead to some very difficult situations for them. The problem, though, is that children with autism have all sorts of other issues, and that we don’t even have a very reliable definition of autism. The area of autism research is messy at best.

In summary, theory of mind is an awesome subject! Please let me know if any of these topics are of interest, and I will see if I can write a more detailed post.