On Princesses and Feminism 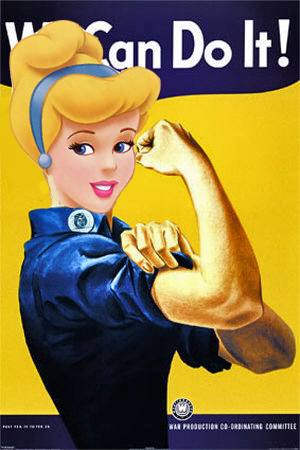 Some of the more sharp-eyed readers here may have already noticed it. Definitely anyone who knows me. But I never announced it plainly and publicly, until now. So there it is. I’m a feminist. I do not hate men (I, in fact, love the one I live with and quite a few others), nor do I automatically support everything every woman does (some women do some crazy things). But I do believe that women should have equal opportunities. Particularly, I think my daughter should have equal opportunities.

For a good long while, I was trying to fight this girliness. I thought that if she’ll be a tomboy, like I was, she would be more of a feminist. She would stand up for herself more, she would think of herself as more capable. I was never a tomboy like Caroline Paul, but growing up in a village in the middle of the desert necessitates some hardiness, even for girls. Nevertheless, I liked to read and play with Barbies (although, admittedly, I would mostly take them apart to see how they worked), and I ended up a feminist. But my girl’s girliness is a level up. We are talking about a person who, at one year of age, when I brought her to the daycare for the first time, made a beeline to the home-corner, commenced nursing the babies there, and refused to leave (which made me realise that in the pandemonium of having my second baby when my first was not two yet, I neglected to purchase any dolls for the lovely lady-to-be. Or any girly toys. She had her brother’s hand-me-downs).

I was particularly worried when I read two articles talking about this. In the first, published in 2014, the experimenters randomly assigned girls (age 4-7 years) into one of three conditions: the first group played with a Mrs. Potato Head, the second group played with a “Fashion Barbie”, and the third played with a “Doctor Barbie”. After 5 minutes of play, the experimenter showed the girls some pictures of work places (such as a restaurant, a hospital, and so on), and asked whether the girls could work there when they grow up, and whether a boy could work there when he grew up. Girls who played with either Barbie were more likely to say that they can’t work at more of the places. In other words, playing with a Barbie for 5 minutes reduced girls’ career options for themselves. There are several issues with this study, however, including the rather small sample size (37 girls total). And I haven’t seen a replication, which is suspicious because that’s quite the effect. Still, it breaks your heart to think that 5 minutes of playing with a Barbie could do that much damage.

I stopped fighting my daughter’s liking of everything princess a long time ago. Mostly because, at least for this particular child, the more we fight with her on something, the more likely she is to resist. Which bodes well for us in the future, especially when we’ll go into the teenage years (hey, Internet, how are we doing on that sarcasm font?). But also because I read this post and, while it was not addressed at me because clearly I cannot be responsible for my girl’s computer engineering future career—this is what her father is for—it struck a chord. “The opposite of science isn’t girl”, says Sara Chipps, and she’s right. Technically, your favourite colour has no implications on your capabilities.

But… the science shows us that your favourite colour does impact at least the way you perceive your own opportunities and options. And, admit it, when you see a girl that’s dressed up in ballet gear complete with fairy wings and a tiara, what you think to yourself is not “a scientist in the making”. Nor is it “man, remembering all the dance moves for a two-hour long show at the end of the year must be hard work!”.

And so, we have these two things: liking pink, ballerinas, and princesses in one hand, and being capable, intelligent, and strong in the other. And until we as a society can accept these two as different sides of someone’s personality, rather than mutually exclusive aspects of development, we need more people, especially parents, saying, “We are feminists. We think that our pink-loving, girly girls should have equal opportunities”.