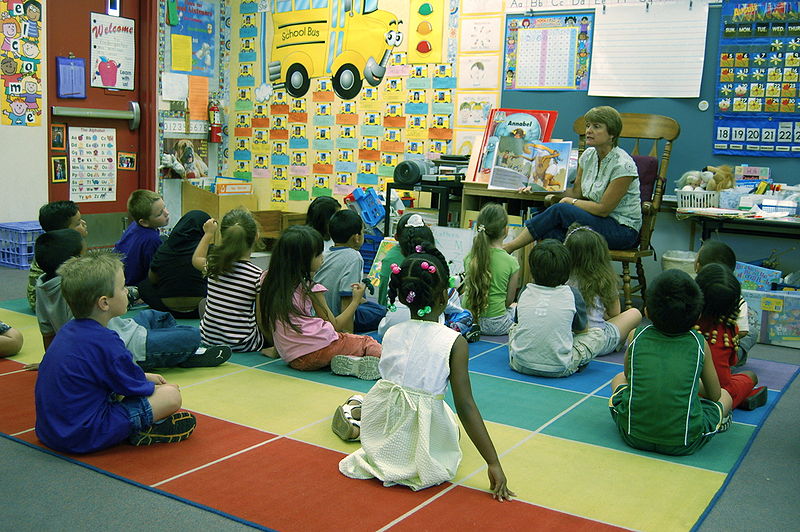 I’m reading a fantastic book called “The Importance of Being Little”. It’s slow work because I don’t get much spare time this year–I’ve started volunteering in all sorts of places to keep myself busy. However, this book gives me lots of “leads”–interesting articles I’d like to read and tell you about. So, if you are in the education sector, I highly recommend this book. I’ll work through some of the articles I’ve found in there, so the next few posts are likely going to be preschool-classroom-related.

I’ll start with a story from two years ago. I went to see daycares and schools when we moved to London, to decide which one we’d like to send the kids into. My son was supposed to start school (they start school early here, with a sort of kindergarten class called “reception”, which starts when the kids are around 4 years old). My daughter was to attend nursery (daycare) for a year before she’d also go to school. I was looking at several places, and one place struck me as very visually busy. There were lots and lots of things on the walls—letters, numbers, science posters, story lines, you name it. It was hard for me to focus on what the nursery coordinator was telling me because I kept being distracted by all the brightly-coloured stuff around me. I remember thinking that they were trying too hard. I later found out that their Ofsted score (a score given by the government to educational institutions; anything less than excellent usually drives a lot of parents away) was not great and they were gearing up for an inspection. It was like they thought that the more stuff they have on the walls, the better the quality of the education is.

You might think, well, what’s the harm of putting a few extra stuff on the walls to make the kids’ environment a little more cheery? They have to spend their whole day in there, it might as well look nice and inviting. And I tend to agree that some pictures on the walls make a room more inviting and friendly. But apparently, heavily decorated classroom actually interfere with learning. How do I know that? Well, there’s a study.

The authors of this study wanted to examine whether classroom decorations interfere with learning. They actually have a good rationale: young children’s executive functions—particularly inhibitory control and working memory—are just emerging, so it’s more difficult for them to ignore distractions than it is for, say, older children or adults. So would they be distracted by brightly-coloured displays?

To check whether the children would be affected, the authors experimentally manipulated the classroom. They took a group of children (a rather small group of children, only 23 kindergarteners), and gave them 6 science lessons that were age-appropriate. The kids got three of the lessons in a “bare” classroom, and three of the lessons in a “decorated” classroom. They all got all lessons in a pre-post design, and they had a knowledge assessment before they started any of the lessons. A nice touch was that the authors decided which lessons to give in which setting based on the results children got on the pre-test: they arranged it so there was no difference in the pre-test knowledge scores, on average, between the lessons that the children received in each setting. In addition to knowledge assessments, the children were videotaped and the time they were actually looking at the teacher as opposed to other things was coded and examined as well.

I love this study because it’s very neat and straightforward. Should we have bare classrooms for kids now? Probably not, because there’s a lot of impact (which wasn’t measured in this study) to how welcomed and safe the children feel in the classroom. Bare walls are just depressing, and we don’t want that. But if you try to have a conversation with your child’s teacher and you are distracted by the barrage of visual stimuli in the classroom, think how likely your child is to be distracted. Perhaps you would like to send your child’s teacher a link to this post, and then perhaps the teacher would decide to reduce the visual displays a bit, at least on the wall the children are facing during story-time or frontal instruction.

I didn’t sign my daughter to the visually rich daycare. I’m not sure how they did on their inspection. But most daycares and early primary-school classrooms I’ve seen are full of all kinds of visual stimuli, and that may not be such a great thing.