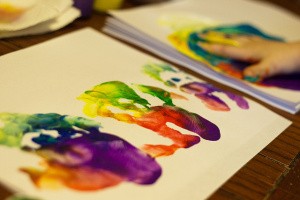 This study comes from Elena Hoicka, who is at Sheffield University. She and her colleagues have a very neat device they call the Unusual Box—it’s a colourful box that has all kinds of pieces attached to its external walls (shelves and strings and such). The Unusual Box Test includes getting 5 different objects to play while interactive with this box. They are measuring divergent thinking by counting the number of different actions that the toddler is performing with these items and the box. Simple and elegant; I’ll get to a tiny little problem with this score later.

The researchers gave toddlers this test, and counted the number of different actions they performed. They did this twice, in the space of about a week or two, to check whether the scores on this task are reliable (see a new entry on reliability in the glossary!). They also measured children’s motor development—a very nice control on their part. The idea is that this task is motor, and so children who are more advanced on their motor development might get higher scores not because of their divergent thinking but because of their better dexterity. They also gave the kids’ parent (they didn’t say how many dads brought toddlers to the lab) a measure of adults’ divergent thinking (drawing as many different things as you can on a set of circles. Try it; it’s lots of fun).

Well, it’s a really nice little task to measure creativity in one-year-olds. It means that we can see individual differences in this skill at a very early age, which is very cool. Here is my small issue with how they scored the task: I think that they should have accounted for the total number of actions the children performed on the box. One-year-olds’ attention tends to stray sometimes, and some kids are just more active than others. Either of these scenarios (lack of focus, higher activity levels) could impact the number of total actions the child is performing on the box, and by that impact the number of different actions she is performing. So I would have liked to see the score as something like the ratio between different (divergent) actions and total actions (and it would also be an easier variable to work with, statistically speaking, but that’s for a whole other blog). In general, however, this lab has produced some interesting research, and I’m looking forward to seeing what else they’ve got