Do Kids Use Too Much Media? 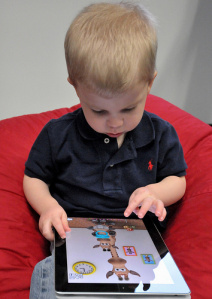 The American Academy of Pediatrics recently published their new guidelines for children’s media use. This, combined with a new survey that found that about a third of kids under 2 years of age have used a tablet or smartphone, has the potential to quickly becoming the new “health scare”.

So what is the problem with screen time? When I was young they said you shouldn’t watch too much TV because you’ll need glasses. That makes the time-limit concern at least 30 years old, and not quite substantiated (see link). But if you read the actual guidelines, the experts are mostly concerned about two things: the content that the kids watch and obesity. Kids watching unsupervised content (especially if it’s in their room) may be learning undesirable behaviours from TV and online. A different point completely is the fact that every hour a child is sitting in front of a screen is an hour in which they are not physically active. Let’s talk a bit about both these points.

Sure, there’s a lot of bad content out there. From TV shows that have been experimentally shown to cause a decrease in executive functions, to pornography that is linked to all kinds of morally questionable attitudes, there’s no question that we as parents must monitor the content that kids are perusing. My question is, can you do that if your first rule is a time limit? When I was a kid, we didn’t have time limits on TV watching. If our homework was done, we could watch as much TV as we wanted to. Our house was the most popular house in the neighbourhood: all the kids who had time limits at their house told their parents they are going to play at my house. Kids are evil geniuses. So in my opinion, setting time limits is not in itself sufficient. If what we are trying to solve is unmonitored TV watching, then we have to increase monitoring, not decrease TV watching. That’s because kids can still watch a lot of bad stuff in two hours if they are left to their own devices. Personally I think that we as parents have a responsibility to teach kids how to watch TV. That is, we have to teach them that TV is not real, that people on TV are not real people, and that some things that happen on TV can’t happen in real life. This is particularly important, I think, in the pre-pubescent age, when they are old enough to watch, for instance, kids on TV that can do bad things and suffer no consequences. But at every age teaching them about how to watch critically and talking about the content they see is important.

A Link Between Watching TV and Obesity

A study done more than a decade ago found that children who have a TV in their room are significantly more likely to be overweight than kids without a TV in their room. This was true after controlling for “sociodemographics, physical activity, frequency of TV or movie watching[,] and internet use”. That’s an impressive set of controls. I don’t have access to the actual paper, so I can’t say anything about the methods of the research. But I think a couple of things are worth noting. First, they controlled (that is, statistically “levelled out”) frequency of TV watching. This means it’s not the time spent watching TV that is driving this relationship. What does? Could it be that kids who have a TV in their room have fewer rules in the household overall? Or perhaps the TV ads increase consumption of less-than-healthy foods? There’s a host of possible explanations, and the truth is we don’t know enough to say what the exact mechanisms are. Another thing to note is that the odds ratio was 1.32. Odds ratio is a statistical way to calculate the difference in risk between two groups. I took the liberty of translating this into concrete numbers, since that’s a lot easier to understand. It means that if in the general population of kids in the US you would expect 22 kids in 100 to be overweight (based on the numbers in this article), than for kids who have a TV in their room that number increases to 29 kids in 100. This is a statistically significant difference, yes, but it’s not quite an epidemic. I think it’s much more pressing to figure out why the other 22 kids are overweight.

Do my kids watch TV? You betcha. But we typically either watch with them (on the first, say, 20 times or so. By the 20th time I’m fairly confident we covered everything), and talk about what the characters do, whether they are real or not (especially monsters and dinosaurs), and what we can do in certain situations (say, if our teacher took us on a field trip to outer space). There’s great content out there, and some pretty awesome iPad apps. For instance, thanks to out newly installed “endless alphabet” app, not only can my 4-year-old spell famished, he can also use it in a sentence. You just have to mind it, like everything else, and teach your child independent thinking and moderation.