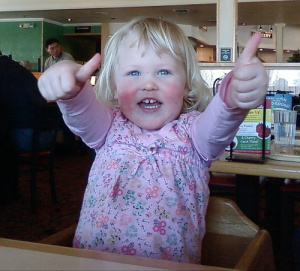 This post is rather longer than usual, but I felt quite a bit of background was needed. Bear with me, as the study is absolutely fascinating. I hope this will spark a discussion in the parenting community about the way we talk to our kids.

What Makes You Go?

Of course, a lot of factors play a role in the kind of motivation you have. For example, some people are just more inclined to one kind of motivation. Moreover, the task that you face plays a big role. Naturally, if you care about the task at hand (e.g., you want to learn more about the subject matter) you are more likely to have intrinsic motivation than if you don’t care about the task (e.g., you are forced to take a course that you don’t care about). One of the factors that determine the kind of motivation you will have is how you perceive your chances of success. And how you perceive your chances of success stems for whether or not you think you (and people in general) can improve through effort. If you think that “you either have it or you don’t” – let’s say, you either have a musical talent or you don’t – you are likely to think that your actions (say, the number of hours you practice) don’t matter to the outcome. If you think, however, that “you are what you do”, you are more likely to think that if you practice enough, you too can be a performing musician. I’ve written before about the concept of talent and whether we could teach our kids to work hard. A new study shows that the kind of praise parents give their children is actually related to whether children perceive intelligence, for example, as being malleable or fixed.

This paper, which was published very recently, followed kids and their parents from a very young age (14 months) to grade school (8 years of age). They measured the amount of praise that parents gave their children when the child was young – at about 1, 2, and 3 years of age. These authors were interested in the difference between process and person praise. Process praise is a praise focused on the process: good job, great catch, etc. Person praise is a praise focused on the person: good girl, you’re so smart, etc. They measured these by observing parents and children in their homes, and then later (when the child was in first or second grade) they asked children about their perception of the malleability of certain attributes (specifically, intelligence and morality, or “being smart” and “being good”). For example, they asked the children why they thought children succeed in class. Is it because they are smart, or because they work hard?

I’ll talk about two interesting findings. First, the study found that boys received more process praise than girls (but there was no difference in the person praise amount, or the total amount of praise between boys and girls). Second, and this is the main finding of the paper, children who received more process praise were more likely – 5 years later – to think that attributes (such as intelligence) are malleable. Children who received less process praise were more likely to think that intelligence is fixed – that your academic success depends on how smart you are, and that your efforts will not make a difference. This relation between process praise and children’s perception of the role of effort in success was significant even after statistically controlling for the effects of parents’ own beliefs, the family’s socioeconomic status, total amount of praise, total amount of parent-child verbal interactions, and the child’s gender. Is your mind blown yet?

First, I find it remarkable that as parents we praise our boys and girls differently. One explanation the authors propose is that perhaps boys are more likely to engage in activities that lend themselves to process praise – that is, for instance, most types of sports. By the way, you should read this post by Rachel from Hands Free Mama about telling your children how you love to watch or hear them play. Also, given the fact that more process praise leads to kids believing that they failed because they didn’t work hard enough rather than because they are not good enough, and given that the latter approach is much more common in girls, I would advise parents to go find their daughters and tell them something good about whatever it is they are doing.

Second, a very clear conclusion from this paper is that parents should try and give their kids more process praise. Now, when I read this kind of thing, I think that I’m a bad mom, because most of what I say to my kids is either person praise (“what a big girl!” qualifies as such, per the authors) or praise that focuses on the outcome – “what a great picture you drew!” But this is not the right approach, neither as a parent nor as a scientist. What we need to remember is that an important determinant of the praise parents give is the type of activity that is most common for the age group. Most of the praise around our house is given for doing things independently – putting on clothes, setting the table, etc. For example, when my daughter goes potty (clearly the most common activity for the 2-year-old age group), I say “what a big girl”. It’s easier than commenting on the process, that’s for sure. By the way, the study found that the use of person praise decreased from 1- to 3-years, although the use of process praise remained the same (overall). So instead of this being another thing that moms feel guilty about, maybe just try to throw in a “good job” more often.