On Affordances And Raising The Bar 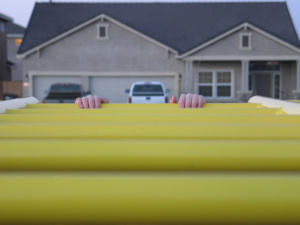 My class this week included me stumbling through Karen Adolph’s work on how infants perceive and negotiate physical obstacles. She does awesome work, you should really check her website out. There are also videos. Side note: I have become addicted to showing videos in my class.

In short, here is the story. Back in the 1950s researchers devised a contraption called the visual cliff. Basically, there is a platform with a pattern, but half of the platform is raised (about a meter off the ground). There is Plexiglas on the entire platform, so that one side is “shallow” and the other side is “deep”, and the drop halfway through is a “visual cliff”. Originally, researchers used this paradigm to check whether babies can perceive depth. The idea was that if babies would avoid going over the “cliff”, it is evidence that they can perceive the difference in height between the two halves of the platform. This is a classic developmental paradigm, and it is probably one of the best-known experiments in child development. It is currently taught in introduction to developmental psychology as evidence that infants are afraid of heights. Karen Adolph’s work with “actual cliffs” (same as visual cliff but without the Plexiglas, with an experimenter functioning as a safety net to catch the babies should they decide to go over the edge), slopes, and gaps shows that babies are in fact not afraid of heights. They are simply learning to negotiate an unfamiliar physical situation, or to solve a novel problem. Most babies, as my students noted in class, do not come across visual cliffs in their natural environment. The explanation is that as they learn to crawl, babies become more and more accurate in perceiving affordances – possibilities for actions – and get better and better at estimating their own ability to traverse these kinds of obstacles.

What surprised me about all this was that when I started prepping this class I was sure that it’s a new advancement in research. The article I read was “in press” (i.e., not yet published), and I was convinced that this interpretation of the findings is not mentioned in my introduction to development psychology textbook simply because it is brand new. Imagine my shock when I found out that the Discovery Channel documentary about these findings was filmed over a decade ago. The idea of affordances is as old as I am (which is not new), and yet it is not mentioned in the chapter about perceptual and motor development.

Which got me thinking: why? Why isn’t it in the textbook? Is it because it is too controversial? Not supported enough empirically? The original article by Gibson is cited, as per Google Scholars, some 2,679 times. Surely it has been tested enough to warrant a mention in the textbook, no?

I have nothing but respect to people who write textbooks. It’s gruelling work, there are lots of details, and it is truly hard to capture the foundations of our knowledge about child development in a book that would be priced so as not to force students to take out a student loan. But following the epigenetic conundrum, I suspect that the reason these “new” findings are not in the textbook is because the authors think that the students (and perhaps the teachers) would find them too complicated.

I admit, neither epigenetic nor affordances are simple notions. They are sophisticated and complex. I will further admit that my explanation of these ideas in class probably left something to be desired. But I passionately believe that it is our job as scientists to get these complex ideas across to people who are not scientists. This is why I write this blog, and this is what I try to do in my class. I will see it as a personal and professional failure on my part if my students leave my class thinking that science possesses a clear and correct answer to every question about child development. In fact, I think we are doing students a disservice if we lead them to think that science is about the answers. Science is about the questions. And students should not be halfway into their PhDs to understand that.