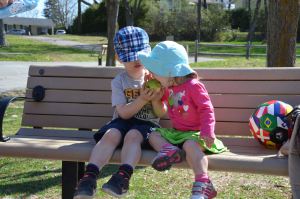 Have you ever tried to get a toddler to share? Do you think it’s an impossible mission? Researchers at the University of Pittsburgh showed that it’s actually pretty easy.

Sharing behaviour is thought to be a part of “human lore”. Whether it is biologically encoded or just learned from being a part of human society, sharing is a behaviour that has helped the human race thrive.

Celia Brownell and her students used sharing tasks to measure toddlers (18- and 24-month-olds, which are pretty little). In these tasks, the experimenter first gave an equal amount of toys to the participating child and another experimenter who was playing the role of “play mate”. The experimenter then took all the toys back and gave all of them to the child. The “play mate” then indicated that she would like the child to share by giving subtle (sighing, looking sad) and not so subtle cues (reaching unsuccessfully for the toys, and eventually asking for some toys). In addition to the sharing tasks, they also tested children’s understanding of ownership (for instance, being able to identify mommy’s shoes and the child’s shoes as such), and got parental reports of the child’s self-understanding (things like using the word “me”) and language (which not enough studies measure!).

What Did They Find?

Another neat finding was that understanding ownership was related to sharing behaviour over and above age. So, regardless of age, children who better understood ownership shared more. What’s interesting is that it looks like it has to do with understanding social norms. The thing about ownership (a fascinating topic all by itself) is that there is nothing in the shoes that inherently marks them as belonging to mommy. So, in order to know that these are mommy’s shoes there is at least some kind of learning of links between objects and people. The authors suggest that both of these things, understanding ownership and sharing, may be driven by some kind of understanding of social norms and values, such as understanding that objects have value. However, it seems to me that the driving force might be just paying attention to the world around them and particularly to the people around them.

Is there a way to promote sharing behaviour? One of the things about this study that differentiate it from previous studies on the topic is that the “sacrifice” of sharing wasn’t big. These were not toys that the children were particularly attached to, nor were they expected to share all of the toys - just some of them. I think these are interesting points. If the child can have an alternative or doesn’t have to share everything, it might be easier for them. I know for my kids, sharing ice cream is a lot harder than sharing chicken, for instance. And my kids are probably abnormal sharers – they are really good about sharing with each other (see picture above). With other kids, well, that’s a different story.

Were your kids good at sharing when they were two? Do you remember a turning point? Was it better with older/younger siblings? Please share your sharing stories! :)