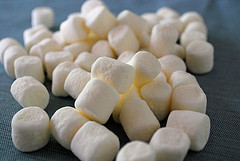 I know I have written about inhibitory control not very long ago, and that I’m technically in the middle of a series about Executive Functions, but this study came out fairly recently and I just can’t resist… Plus, I was giving a guest lecture for my supervisor the other day, and she showed the video in class and it’s really great.

So, remember I talked about the marshmallow task? It’s a delay of gratification (also known as inhibitory control – delay) task, in which 4-year-olds are told that they can eat one marshmallow now, or wait and get two marshmallows later. The original study was done in the 1970s, and the children have been followed up decades and decades later. It turns out that the longer a child could wait for that second marshmallow, the better he or she did on a host of outcome measures, including SAT scores and coping with stress.

There’s a new study out that looked at the roots of this ability to delay gratification. The researchers had the children first do an “art project” with a not-so-exciting array of crayons. The children were told that if they can wait, the researcher is going to get them a really nice art supplies set. What the researchers did was assign children randomly to one of two conditions. In the “reliable” condition, the researcher came back after 2.5 minutes with a really neat art supplies set. In the “unreliable” condition the researcher came back empty-handed and said she can’t find the art supplies. After they have established this “environmental” factor, they did the marshmallow task. They found a staggering effect – honestly, no one gets an effect this big. The amount of time (number of seconds) that children in the reliable condition waited for the second marshmallow was four times longer than the amount of time children in the unreliable condition waited.

The thing about this study is that it’s a very elegant way to examine environmental stability in the lab. If you care to generalize from this study, you could argue that children who grow up in an “unreliable” environment (i.e., when adults say they are going to do something but never do, for various reasons) experience those adults as unreliable. Therefore, when those adults tell them to wait, why should they? When adults tell them to save for the future, they see no reason to – in fact, the rational thing to do in an unstable environment is to consume your resources as soon as you have them.

What Can We Learn?

So what can we learn from this study? The most important thing, I would say, is to always keep your promises to children. It’s ok if something happens and you can’t go to the park even though you said you would, but if this research teaches us anything is that you have to try mighty hard to do as you say.

Do you remember broken promises? Do you think it affects your view of the person who broke the promise?