On Saving, Consequences, and Teaching Children Both 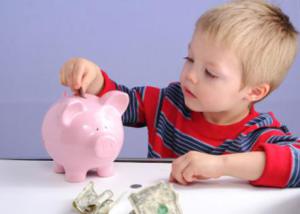 There’s a whole research area called economic psychology, looking at the psychological factors that drive people’s financial decision-making: how much to save and when, what risks to take with money, when and how much to spend and on what, that sort of things. It’s interesting stuff. There are also a few developmental researchers who are interested in the development of financial decision-making. Specifically, people are interested in children’s saving behaviours: at what age can children save? What are the skills that help them to save? Is there anything we can do to raise financially prudent citizens?

Recently, a study done at the University of Ottawa addressed some of these questions in a very neat way (you can read the whole thing here). Jennifer Metcalfe and Christina Atance (whom I know from a collaboration between our labs) created a study setup in which participating children are shown two marble-runs: one is awesome and the other is lame. Once you put a marble in the run, it goes into a box and you can’t take it out (well, if you are 5 years old you can’t. The experimenters can, in fact, get the marbles out). Then, the children are given 3 marbles, and are told that they will spend 3 minutes in the room where the lame marble-run is, and after that they can play for 3 minutes in the room where the awesome marble-run is. The idea is to see if the children can save at least some of the marbles to play with the awesome marble-run, and can they do it when faced with three long minutes of boredom (both rooms are pretty much bare except for the marble-run). They did two trials, to see if the children are able to save more marbles in the second time, based on their experience of having used all their marbles to play with the lame marble run and then going into the room with the awesome marble run and being bummed about not having any marbles.

They found that children aged 3-5 years saved more marbles in the second trial than they did in the first trial. That is, after they went through the negative experience of having used all their marbles on the lame marble run, they were able to make use of this experience and predict that this time they should keep some of the marbles for the second room. But mainly, this means that even 3-year-olds are capable of saving. Mostly, it means that if they experience the harsh consequences of their lack of saving, they are more likely to save when faced with a similar situation.

What does it mean? Well, as many “parenting experts” will tell you (you know who I mean), it’s very important that children experience the consequences of their actions. This is a great example. To me, this means that 3-year-olds learn from their experiences, and very quickly, too: it only took 3 minutes in a room with an awesome marble-run and no marbles for them to improve on their savings behaviours. That said, when your 3-year-old is crying, sticking to consequences is very hard. I had to stop the bed-time story the other night, because I said that if he’ll continue to run around the room while I’m reading the story, that tells me he doesn’t want to listen (also, from a parenting point of view, it’s missing the whole point of quiet time before bed). Even though I had piles of research on my side, putting him to bed sobbing that he wants a story and he’ll “behave” was definitely one of the hardest things I ever had to do.

What about you? Do you keep to your consequences? How?